The month-to-month sales gain was higher than usual. On average, sales have increased 2.9 percent between March and April since 1988, when DataQuick’s statistics begin. Sales have fallen on a year-over-year basis for seven consecutive months, but last month’s 2.7 percent dip from a year earlier was the smallest decline in that series.

Of the existing homes sold last month, 6.7 percent were properties that had been foreclosed on during the past year. That was down from a revised 7.2 percent in March and down from 13.5 percent a year earlier. Foreclosure resales peaked at 58.8 percent in February 2009.

Short sales – transactions where the sale price fell short of what was owed on the property – made up an estimated 5.5 percent of the homes that resold last month. That was down from an estimated 7.0 percent the month before and down from 16.1 percent a year earlier.

The typical monthly mortgage payment that California buyers committed themselves to paying last month was $1,523, up from $1,496 the month before and up from $1,157 a year earlier. Adjusted for inflation, last month’s payment was 34.8 percent below the typical payment in spring 1989, the peak of the prior real estate cycle. It was 47.1 percent below the current cycle’s peak in June 2006. It was 63.6 percent above the January 2012 bottom of the current cycle.

Indicators of market distress continue to decline. Foreclosure activity remains well below year-ago and peak levels reached in the last five years. Financing with multiple mortgages is low, while down payment sizes are stable, DataQuick reported. 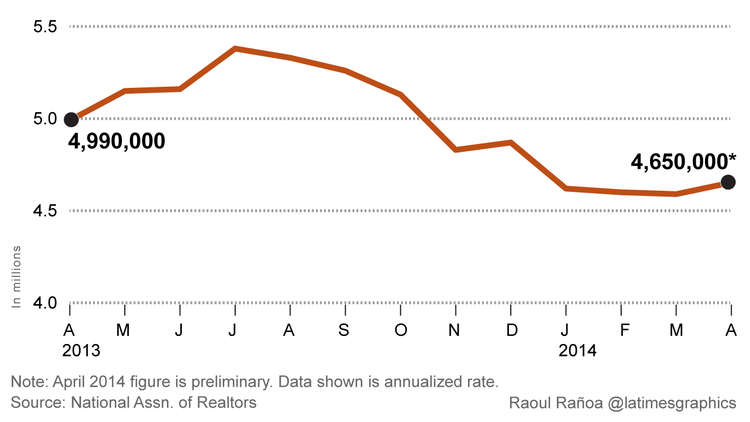 Sales of previously owned homes rose nationwide in April as the housing market picked up some steam amid the spring selling season.

Home resales climbed 1.3% from March to a seasonally adjusted annual rate of 4.65 million, the National Assn. of Realtors reported Thursday. That was the first gain this year, though it missed expectations slightly.

The uptick from March, driven by strong gains in the West, came as the housing market has cooled recently. Would-be buyers have struggled to afford houses after prices surged last year. And severe weather in much of the country further depressed sales to kick off 2014.

“Some growth was inevitable after sub-par housing activity in the first quarter, but improved inventory is expanding choices, and sales should generally trend upward from this point,” Lawrence Yun, the trade group’s chief economist, said in a statement.

But compared with April 2013, sales were down 6.8%. Yun said there would probably be fewer sales this year than in 2013, citing the poor first quarter.

In a sign that affordability remains a problem, the national gain from March came largely from condominium and co-op sales. Sales of those attached units climbed 7.3% from March. Single-family home sales, generally more expensive than multifamily units, rose just 0.5%.

Jay Feldman, an economist with Credit Suisse, said in a research note that “sales seem to be finding a bottom” but are held back by weak demand from first-time home buyers. Many of those would-be buyers are weighed down with student debt. As investors have pulled back this year, first-time buyers have struggled to fill that void, depressing sales as a result.

There could be help on the horizon. After shooting up last year, mortgage rates have stabilized and are still low historically. Lenders, on average, offered a 30-year fixed loan at 4.14% this week, the lowest rate since October, mortgage finance giant Freddie Mac said Thursday.

Inventory is also on the rise. There was a 5.9-month supply of existing homes for sale last month — meaning that if homes sold at their current pace, all properties on the market would be sold in that time period — compared with a 5.1-month supply in March.

Economists generally consider a six-month supply to be healthy.

More inventory should boost sales in the near future and temper the price increases that have locked some buyers out of the market, economists said. 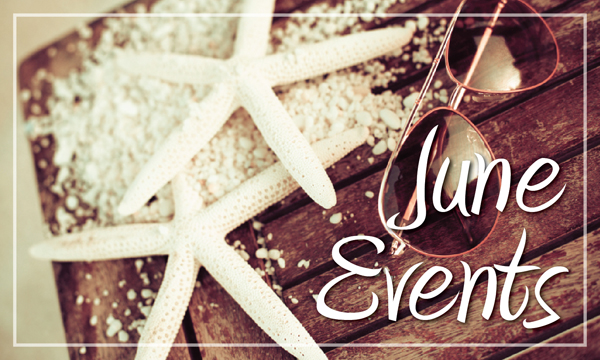 LOS ANGELES (May 8) – Even in a state with hundreds of miles of beautiful, sandy beaches, luxury home buyers in California preferred hilltop homes over ocean-front properties by a margin of four to one, according to the CALIFORNIA ASSOCIATION OF REALTORS®’ (C.A.R.) “2013 Luxury Real Estate Consumer Survey.”

• One-fourth of luxury home buyers said the main reason they purchased a home was because they wanted a larger home, compared to traditional buyers (23 percent) who said they were tired of renting as the primary reason for purchasing a home.

• With luxury home buyers usually being higher income earners, more than a third of all luxury buyers (35 percent) were able to pay all cash for their property, compared to 27 percent of traditional buyers, and 11 percent of first-time buyers.

• Buyers of luxury properties tend to be more optimistic than traditional buyers, with more than seven in 10 (71 percent) luxury buyers saying they expected home prices to increase in one year, compared to 36 percent of traditional buyers.

• Luxury home buyers intended to keep the property for a median of 10 years, compared to six years for traditional buyers.

The Luxury Real Estate Consumer Survey was conducted via email to a random sample of REALTORS® statewide who worked with luxury home buyers. All eligible respondents closed escrow on their homes within the 12 months prior to November 2013.  The survey asked REALTORS® a series of questions regarding their last closed transaction with a luxury client. Access the full report on the survey findings here: http://www.car.org/marketdata/surveys/other/ and view the webinar presentation here: http://www.car.org/marketdata/videos.

Leading the way…® in California real estate for more than 100 years, the CALIFORNIA ASSOCIATION OF REALTORS® (www.car.org) is one of the largest state trade organizations in the United States with 165,000 members dedicated to the advancement of professionalism in real estate. C.A.R. is headquartered in Los Angeles.

WASHINGTON, DC, May 08, 2014 (Marketwired via COMTEX) — Analysis of data collected for the Realtors(R) Confidence Index shows the market share of all-cash purchases is on the rise, despite declines in distressed sales and investor activity, according to the National Association of Realtors(R).

Lawrence Yun, NAR chief economist, said the findings are counterintuitive. “Distressed home sales, most popular with investors who pay cash, have declined notably in the past two years, yet the share of all-cash purchases has risen,” he said. “At the same time, investors have declined as a market share, indicating other changes have been underway in the marketplace.”

In Florida more than half of all homes were purchased with cash. High levels of all-cash sales also were recorded in Nevada, Arizona and West Virginia, accounting for close to four out of 10 transactions.

The findings, derived from a survey of about 3,000 responses each month for NAR’s Realtors(R) Confidence Index, also show investors edged down from 20 percent of buyers in 2012 to 19 percent in both 2013 and the first quarter of this year.

A separate annual study of consumers, NAR’s 2014 Investment and Vacation Home Buyers Survey, shows investors at a somewhat higher market share, but declining more sharply from 24 percent in 2012 to 20 percent in 2013.

“These findings beg the question as to why we’re seeing higher shares of cash purchases,” Yun said. “The restrictive mortgage lending standards are a factor, but the higher levels of cash sales may also come from the aging of the baby boom generation, with more trade-down and retirement buyers paying cash with decades of equity accumulation.”

Another study, the 2013 National Association of Realtors(R) Profile of Home Buyers and Sellers, shows trade-down buyers rose to 29 percent of buyers last year from 25 percent in the 2012 study and 23 percent in 2011, suggesting a contribution to the trend in cash sales.

“A majority of foreign buyers pay cash as well, and the five-year bull run of the stock market has also provided financial wherewithal among higher wealth households,” Yun said.

“Florida is the most popular state for international buyers, who generally pay cash, as well as vacation-home buyers who frequently pay cash. In addition, downsizing retirees are known to pay cash from the proceeds of their homes in the north. This helps to explain the disparity there, but that isn’t the case in most other states,” Yun said.

For example, in West Virginia cash sales rose from about one-third of buyers in 2012 to nearly four out of 10 buyers in 2013, but distressed sales declined from a quarter of the market to less than one in five, and investors were half of what they had been in 2012.

The National Association of Realtors(R), “The Voice for Real Estate,” is America’s largest trade association, representing 1 million members involved in all aspects of the residential and commercial real estate industries.

NOTE: While the survey was not designed to break out geographically, sufficient data is available to provide annual market shares for 29 states on all-cash sales, investors and distressed sales for 2012, 2013 and the first quarter of 2014. There were insufficient data for 21 states and the District of Columbia, but breakouts are available for nine sub-regions with responses from every state.